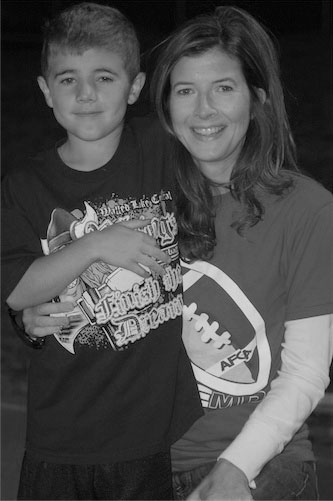 back to news & inspiration

There are moments, many moments, within this crummy diagnosis that are crummier than others, crummier than crummy. They are the moments that jar me from near-peace and almost-sane and no-my-heart-really-isn’t-so-broken. They are a neon sign flashing "you can’t escape this Duchenne thing. It’s real. It’s not going away." The first time I felt that was about a minute and a half after the neurologist delivered the diagnosis. He was calmly conveying all the statistics about Duchenne and our new life and he scared me right out of my shoes with little gems like "heart failure" and "loss of ambulation" and "ventilator".

The biggie for me was when he talked about Joseph losing the ability to walk. He told us that he would likely be "wheelchair-bound" around the age of 10. It was that visual, the physical outward manifestation of what this disease was doing to him on the inside, that got me. It was the "bound" part. Like that wheelchair would be an extension of Joseph. He would be confined. Stuck.

As I watched Joseph over the next few days, I couldn’t imagine him not walking. So I avoided it. I pushed the thought away, focusing on more urgent matters like what doctors he would need to see and what I would make for dinner.

Normal crept back in. Joseph carried on, unaware, and I went about my normal routine. I would entertain thoughts of the future but I buckled under their weight so I let them go. As weeks and months went on and physical challenges came up, I dealt with them and cheered Joseph on. At least he was still walking. The weeks and months became a year and then several years and Joseph slowed down dramatically. His fast walking turned to slow hobbling. He crawled up steps instead of walked, and he smiled good-naturedly when I lifted him in and out of the car.

I knew we were losing the walking battle. I knew Duchenne was taking its toll. I saw the focus and determination on Joseph’s face when he tried to stand up from a chair, and my heart hurt for the anguish and frustration on his face when his legs gave out without warning, leaving him bruised in a heap on the floor.

I began to think more often about the end of his walking and I wondered when it would come. I hoped I would get some kind of warning, some kind of timeline, and that it would be clear his walking days were on a countdown. But that’s not how it works.

The moment sneaked up without warning and…boom! He was just done. He took his last step sometime on some non-descript day and I can’t remember it. I have no idea when it was or where it happened or if I even saw it. I lift him from the chair to a standing position and hold him while he gets his balance, waiting for him to take a step. "Mom," he says quietly. "Can you just put me in my scooter?" I resist. "Sure, buddy, but how about if you take a few steps? We need to keep you moving."

My plea is the cry of someone riding the fence between acceptance and denial. I know intellectually that I’m only delaying the inevitable by days or hours, but I want to keep fighting. He knows better.

"Mom," he says again more emphatically. "I need to be in my scooter." I put my arms back under his armpits and lift him gently into his scooter. He tilts his head up to me and smiles, his faced filled with calm and peace. I kiss his head and sigh, knowing that while I want to fix him, he will fix me. He will show me the way.

We dance this dance a few more times. I lift him up to stand and wait for him to lift one foot and place it in front of the other. He patiently reminds me that he can’t. He can no longer lift his feet. I put him in the scooter. He smiles. I ache.

So this is it. My soul knows what my heart breaks for and my head cannot yet comprehend. There will be no more walking.

I quickly come to know the longing of wishing he could still walk. I know the ache – the weight that dwells deep in my gut. If I indulge that longing, it morphs into fear and without warning escalates into panic. I long for him to walk; to get up out of the darn wheelchair and take a step. Just one. I fear his future and I panic that he’ll suffer or I won’t know how to best care for him. But, as much as I know the ache, I also know the truth…and it is this…heartache and happiness can co-exist. They can hang out together and get along just fine. I can feel both, often at the same time. Happiness softens the heartache, and heartache sweetens the happiness. There are days when we'll conquer and days when we'll wallow.

On a too-familiar sleepless night, I’m laying here wallowing and a thought comes to me that I try to push away. The harder I push the stronger it returns. It’s a good thought, and I actually find that really annoying. Tonight I’m feeling sorry for myself. And I’m mad. I’m mad at Duchenne and I’m mad that I can’t fix him. And I’m scared. Really scared. I’m not ready for a good thought. But here it is. It’s this memory that I can’t shake…the one from when I took my older son on a ski trip to Colorado two years ago. We were going to visit my sister who’d just moved to Boulder. As we sat on the plane about to take off I sent her a text — "We are on our way! Colorado-bound!" Bound. On our way. Headed to fun. Leaving one place and making our way to another. And I can’t ignore the stark contrast of the 2 "bounds" – the "bound" of the you’re-done-walking-and-in-a-wheelchair-now variety, and the "bound" of the woohoo-we-are-headed-to-the-mountains-for-fun variety. Bound — stuck confined stationary. Bound — in motion heading toward something. Bound TO something. Bound FOR something.

I’m frustrated at my own hint of optimism. I can feel my thoughts turning, my view of this new status softening and my head tells my heart to just knock it off; that I am not ready for that. I actually squeeze my forehead with both hands and speak out loud. "Stop it!" I scold myself. "Stop trying to make things better."

I keep trying to push it back, but that stubborn thought has opened a teeny tiny crack in the door that hope wants to sneak through. Hope is a feisty little thing. Pushing against the door with both hands, and slipping through, stroking my cheek and whispering the truth, reminding me of what I’d known all along.

It’s true. Joseph is bound to a wheelchair. We know what he’s bound to. But he’s also bound for something. And I wonder if he’s on his way to some pretty awesome stuff. I wonder where we’re headed. Where he’s headed.

The knot in my stomach begins to unfold; still there but now relaxing into fragile strands of fear and weakening waves of nausea. I feel my breath for the first time in days. Full and warm and sure.

Maybe Joseph is bound for peace. No longer afraid of the falls that scraped his knees and bruised his head and rocked him with the constant fear of his legs failing him.

Maybe he’s bound for comfort. Free of the exhausting effort to stand and keep his balance.

Maybe he’s bound for freedom. No longer struggling to move one foot in front of the other, taking minutes to move just a few steps. Now he’s free to "run" with the speed of his scooter or wheelchair as his companion. Maybe he’s bound for adventure…inspired by our freshly deepened understanding that we better have a lot of fun and live a lot of life every single day.

Maybe he’s bound for purpose…he is a force of happiness that illuminates what really matters for anyone who pays attention. Maybe he’s bound for acceptance…with the calm grace of one who is free from the ambiguity of wondering when his last steps will be.

I’m not naive. I know losing ambulation is the beginning to more loss. I know the health hazards of sitting in a wheelchair all day. I know the impact on the spine and the lungs. I understand about pressure sores and loss of function. I know there are things that I don’t yet know. There are realities that I don’t understand and will learn from the tough teacher called experience.

But if there’s one thing that Duchenne has taught me, it’s that today is literally all we have. It’s a cheap cliché, but it’s so true. So I’m just going to have this day and I’m going to embrace it and hold it against my face like it’s a new puppy. This one day where I can look right at that wheelchair and not want to take a baseball bat to it and smash it to bits as though it is Duchenne itself. No. Today I’m looking at that wheelchair with skeptical optimism. I will work my way through this box of tissues and through these heavy tears and I will, for the love of all that’s holy, entertain the possibility that being bound to that chair may allow him to be bound for something special.

I’m not sure exactly what comes next or what this all means, but this does not mean that we will sustain ourselves on a soul-sucking diet of self-pity. Nor does it mean that we’ll deny the longing for what was and the fear of what is to come. Once fate bursts in through the front door and delivers the life we’ve been given, we have decisions to make. For me, it’s super simple. This is the life we’ve got. And we are going to live the heck out of it.

I watch him often now, spinning around in the wheelchair, moving faster than he has for so many years and maneuvering through the house with a huge smile on his face. I cannot promise myself what exactly it is that his future holds or what he is bound for, but I know one thing for sure — although his muscles are growing weaker and he’s sitting rather than standing, I’ve never seen him stronger or taller.

back to news & inspiration